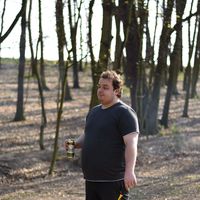 In general I try not to judge people and be generous. Only attributes I require in a person are goodwill and sense of humour. I am more silent than talkative, but if you get me started on a topic I am passionate about, I can go on for hours.

My family has a history of communist persecution, non-compliance with authority and generally not shutting up about what we believe in. In order to think, you have to take the risk of being offensive sometimes. I am ready to cordially disagree with you and please be ready to do the same.

In light of current events around the world, I would like to endorse the most important quote of the 20th century by Viktor Frankl: “There are two races of men in this world, but only these two—the 'race' of the decent man and the 'race' of the indecent man. Both are found everywhere; they penetrate into all groups of society. No group consists entirely of decent or indecent people.”

I have a couch, free weekends and little time to travel at the moment. Since I am more interested in people than places (I can use Google pretty well), I want to make the world come to me.

MUSIC
All time favorite band is Pink Floyd, but I like all the good music (mainly progressive rock, folk and reggae). In the last couple of months I started listening to electronic music more ...

MOVIES
Forrest Gump, American History X, Big Lebowski, Matrix and many more ... also, I like TV series based on great characters like The Office, Rick and Morty or Parks and recreation

The most important book for everyone who is interested in politics: The Quest for Cosmic Justice by Thomas Sowell. The Screwtape Letters by C.S. Lewis, now that's something else ... can't explain, you have to find out for yourself ...

I can teach you some fun card games (but they are mostly complex, I love strategy).

I love learning new stuff, but nothing special comes to mind ... if you want to learn something for a long time, you don't really want to learn it. You just brag about it.

I can share my knowledge, strong opinions on issues, crazy stories and drinks. I would share food, but I am usually short on that.