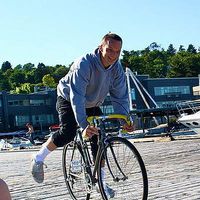 Native Seattleite, one-time San Franciscan, and now a New Yorker working as a software engineer in the city. I like running, reading, writing, cooking, and the occasional craft gin cocktail.

Travel is priceless.
I also told myself I'd run two half-marathons and two marathons before I turned 29, so I might be traveling the northeast looking for a couch for that. If you're a runner I'd love to hear from you.

As of this writing, I'm vegan and am interested in new experiences around the city wherever I'm staying. I'm a lightweight, so if you drag me off to a bar it could be an early evening, but I'm usually up for a drink or a beer and always love spending time with hosts and doing whatever they're doing.

Movies - Moonlight, the Draughtsman's Contract, anything by Kubrick, anything by the Coen brothers, lots of documentaries.

Music - almost everything, maybe with the exception of smooth jazz. Though I like regular jazz! My main genres are hip hop, electronic, classical, jazz, and podcasts.

I lived in a commune on a farm in Montana for a summer in 2016. That was pretty wacky, though I had a great time and have probably never spent so much time in nature. On the way back to San Francisco I caught a ride with a German who had come all the way from Europe to buy a classic Ford Mustang. It broke down and we drove to San Francisco in a 30 year old car the repairman was willing to lease us for the trip. Life has been comparatively tame since those days.

I'm a budding software engineer. If you have ever had that dream app idea or need a website, I can tell you how to get it done.

I'm not the best cook ever but I love cooking. This is something I'd be very glad to share with anyone who's hosting me. Favorite things to cook are pastas, homemade loaves of bread, vegan Mexican food, and am open to whatever you can throw at me. Other than that what I can share is a good attitude, a love of meeting new people of all walks of life, and a sense of adventure.