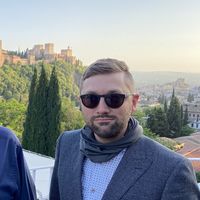 Born in Sweden, lived extensively in Sweden, the United States and short stints in various European countries. Passionate individual who loves the merging of fiction and reality, adventures are easily sold to me. I am a student, one that is inspired by conversation and thought. Enjoy people who are amenable to argument and spontaneous. Currently earning a Masters degree in Strasbourg, France.

My personal philosophy is constantly evolving. I cannot lay claim to any set of formal guiding principles for my behaviour here on earth. In general I think that the philosophical and theological idea's developed by humans on the question of our fundamental nature and our existence have lead to some intriguing formulations of thought. These thoughts demonstrate the immense sense of fantasy and intelligence we as humans possess, uniquely different from any other species on earth, whether or not they mirror reality is another question. One can only hope we utilise these thoughts towards a peaceful tomorrow.Darwin supposedly said to his wife on his death bed: "It's almost worth while to be sick to be nursed by you", I feel this way about the human condition. We are all sick in some way, hoping to find people to nourish us back to health, but not healthy enough not to require the assistance of others.

Books namely non-fiction, libraries, documentaries, music, aviation, space, business, law. I have many interests which I pursue all at the same time. As admirable as this may be, it has posed a bit of a problem when trying to complete any singular task. I have now decided to limit myself to focusing only on one or two of my many interests at a time. So these days most of my time is spent on two interests, aviation and Space. Everything from meteorology, aerodynamics, composites, orbits and micro-gravity. Apart from my interest in aviation and space travel, I have an interest in documentary film as I have worked as an interviewer and director. Furthermore, I have worked with human rights and legal work and as deeply troubling as these two may be at times, I find enough interest to keep them alive. I am also an avid reader of broadcast news, science journals, aviation magazines, and for a dose of whats happening globally, The Economist. As for listening and viewing, I frequent the likes of the BBC, MaanNews, Haaretz and DemocracyNow.

The Farthest Shore, The Black Swan, Beyond Lion Rock, Learning The Law, The Garden of Allah, The Zapatista Reader, Confessions of an Economic Hitman, Robert Fisk, Seven Pillars of Wisdom.As for music, currently Georges Brassens, David Dondero, David Sandstrom, Jose Gonzales, The Knife, The Innocence Mission, Cornelis Vreeswijk and any small town house show band or bookstore venue were the environment sounds better then the music/noise.

Will have to think about this.