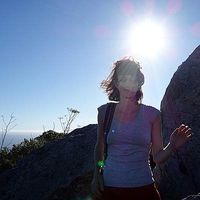 I'm interested in people-- I spent Labor Day weekend on assignment panhandling with a homeless woman in Miami and learned more from her than any of the big-whig administrators I've interviewed.

I've hosted people and I've been hosted by people.

food, whatever you have to say, stupid stuff, smart stuff, literary journalism, zines, collages, Florida, you and your travels. perspectives are interesting to me.

Posed as a homeless person in the streets of Miami for a newspaper article. It was harder than it sounds.

The least of people sometimes have the most to say.