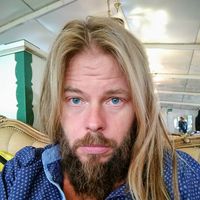 I'm (Jankó) from Budapest, where I live together with my boyfriend Marco, who is originally from Germany. I'm often travelling and surfing alone, but in Budapest we're usually hosting together.

Very important: As tourism has a huge impact on our climate, we host only travellers who travel in a climate friendly way. We don't wanna support that people just fly around Europe for fun. No problem if you fly between continents, there's no other way to travel, but in Europe there's an amazing railway and bus network, so we host only people who don't fly inside Europe.

We love to explore the world by travelling and by hosting as well. Hosting is sometimes like travelling, it's like being a traveller in your own city, so if we don't have enough time to travel, we host, it's lovely :) The best way of learning about the world is meeting people. Seeing tourist attractions is important, and they are interesting (especially architecture), but doesn't necessarily let you feel the real spirit of the place you're visiting. People don't live in a city, they are the city by themselves. That's why we are interested in people who live there, that's why we love to be hosted by locals. It's the best way to get to know how people live in the place we are visiting.

Oh, and we love languages, we appreciate people a lot who actually make some effort to learn any strange languages :)

And we love Miranda, such fun!

That's really the best way to get to know the word, and that's also very good way to make new friends. Significant amount of our friends are from here :)

I (Jankó) can teach everything about railways, he can explain why less trains in a timetable are more expensive for the state then more. And he can talk a lot about Hungarian and European politics.

Marco can teach how to crochet hair, how to do crappy overtone singing, how to speak German or how to learn Hungarian :)

Both of us can teach how to cook authentic vegetarian Hungarian dishes, and we can teach a lot about Budapest architecture and history:)