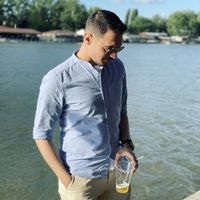 So, I just opened my CS account after 2 years and the "About me" section was super cringy so I deleted it all and I'll keep it simple. :D

Just a regular guy living in Belgrade, Serbia with 2 cats, soon to graduate in Civil Engineering. I work as a Consultant in a firm organizing business awards events. I am a loner and super friendly at the same time, I love spending time at home by myself, but I also love partying hard. I live for beers with friends, spontaneous moments and the "go with the flow" state of mind. Made some bad decisions in life, made some amazing ones, as well. I love traveling solo and having the best time ever with random people I meet along the way.

One beer is too much, two beers are too few.

-Lots of drunk moments and spontaneous nightouts
-Lots of Berlin stories (if you know you know :P)
-Was invited to the stage at Santigold concert at the EXIT festival
-Was punched in the face by 3 guys at the EXIT festival for spilling little beer on one of them
-Becoming an uncle
-Adopting 2 cats
-Moving to Belgrade alone at the age of 14 to study at the Mathematical Grammar School for gifted children