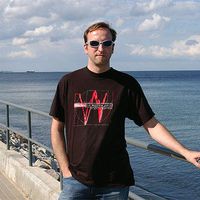 I don't like talking about myself :) I'm a calm and humble person, not a typical party animal :) I like travelling, but I like the feeling of coming back home as well, so I guess I'm not a typical couch surfer :) I like loud music and loud cars, but not necessarily loud people ;)

I'm always trying to treat people in a polite and respectable way and I'm expecting to get treated that way as well.

From time to time ;)

I like sports activities, watching independent movies, reading books, football, motorsport, rock music, photography, sci-fi and many other things too.

favourite books: A Clockwork Orange, One Flew Over The Cuckoo's Nest, 1984 and many more

favourite music: anything with live energy, mostly rock and metal bands that have their original style and identity like Metallica, Megadeth, Queens of The Stone Age, Noir Desir, Tesseract or Pink Floyd

Traveling over 1200 kilometers with my own car to see the famous Mille Miglia Rally after my flight to Italy was canceled due to the volcanic ash cloud from Iceland in 2010 :)

Can conquering the north loop of the Nurburgring with a 15-year old VW Golf III be considered amazing? :D

I can show you my city, but don't ask me when, why and in what architectural style a certain building was built. I'm not a historian! :)