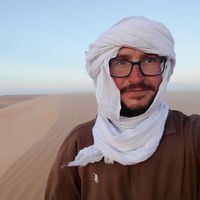 QUICK NOTE:
Lately I'm really rarely in Wrocław, so if you have limited number of requests to send, it's better to use it on someone else.

I have two modes. At home I'm a suit'n'tie-wearing big data engineer, that loves to stay in confortable bed and read books. When I'm travelling I can sleep anywhere and I go everywhere by hitchhiking. But there are few things my two modes have in common: I like to meet new people, hangout with them drinking some beer and talking about everything that comes to our minds.

Btw, I collect beer bottle caps and my collection is huge (around 3000 caps from 100 countries). If you are one of the gift-giving surfers and you happen to have some caps with you (the more exotic, the better), then I'd more than love to see them!

I like to know something about everything, so every half a year or so I switch to another topic and try to read as much as I can about it. Lately I've decided that I need to know biology better. Before that, I've read everything I could about artificial intelligence, before: about architecture etc....

2016: I've hitchhiked from Poland to Central Asia (the furthest would probably be Tajikistan) and from Iran back home. If it wasn't for the Turkmeni visa, I'd have made the round trip.

2019: I've hitchhiked from Poland to Guinea Bissau. During that trip I took the ride in the empty iron ore carriage in Mauritania. One of my dreams came true! On the same trip I've given an interview to the Mauritanian national TV news. I'm a star!

I've been interrogated for few hours in Lebanon, accused of being an Israeli spy.

A pack of homeless dogs at Bulgarian-Romanian border had encircled me in the middle of the night and has given me few gray hair more.

Walking alone for around 20 km in Prokletije Mountains in Albania with only stars as a source of light to catch a ferry in Fierza was a thing I'll never forget.

Oh, and sleeping on the steppe in Kazakhstan. What a night sky!

I am good at history, politics and geography, especially of Eastern Europe.