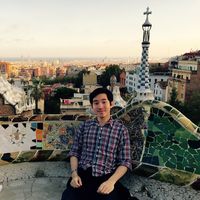 *I just updated my travel page for Taiwan this Winter, and if you’re seeing this profile now I just haven’t updated the info here yet but I plan to do so this week.

About a year ago I graduated from university in New York. I studied Economics because that is what seemed to me to be what was worth doing at the time given the amount of money that went into tuition costs. I wasn't very good at it but I made it through. What fascinated me more was cinema, literature, music, art. Though I couldn't formally study those fields, I was lucky enough to be in the city that seemed to most cater to those interests. And I spent most of my free time falling deeper in love with each one.

I've since spent about half the time this past year resting, recuperating, and spending time with family back home in the Philippines. In that time I kept myself busy by listening to college lectures by the Great Courses and learning more about philosophy, religion, and classical music. The other half I spent backpacking in Japan and India, respectively. Both trips broadened my appreciation of the world and its variety of cultures and traditions. I am incredibly grateful for each of those experiences.

I tried it a couple of months ago in Tokyo and was amazed by the generosity that people showed with their energy and time. I also realized how unique of an opportunity it was to spend more time with the people who actually live in the cities I wanted to explore. I love to learn more about the world and Couchsurfing has been an incredible way to do so. I treasure each of the experiences I've had dipping into the worlds of people I never would have been able to meet otherwise.

I've recently been getting into classical (or concert) music and it's honestly changed my life. It doesn't really feel fair to list out my favorite pieces because it's so hard to choose but I've slowly been listening to the music of Bach, Mozart, Haydn, Beethoven, Mahler, and Rachmaninoff.

I like other more contemporary things too. I'm a big Frank Ocean fan, and I listen to Kanye West, Radiohead, Björk, LCD Soundsystem, Talking Heads, The Velvet Underground, The Beatles, and much more. Though I guess not all of that is particularly "contemporary", per se.

Instead of having favorite books, here are some authors I've read and am prioritizing spending time trying to read more of: Plato, Friedrich Nietzsche, Ludwig Wittgenstein, Fyodor Dostoevsky, and Yukio Mishima. I've also been trying to read more of the religious texts of different world traditions. I've read Confucius' Analects, Dhammapada, the main Upanishads, Tao Te Ching, and Bhavagad Gita. I'm planning to next read the Book of Certitude (Baha'i), the Zafarnama (Sikh), the book of Zhuangzi (Taoism), the Quran, and more Sufi poetry.

I'm not as serious as all that sounds, I'm really just interested in learning more about the world.

I think it's amazing that I was able to adapt to and even thrive in the crazy environment of New York City at an age in which I had at the time spent all my time previously very dependent. I'm an only child as well, so it was a big step for me to leave all that behind and throw myself into the broader world.

I wish I had more hard skills that I could teach others, but I am at least pretty proficient in English so I could definitely help with that, or even with some other general subjects before university. I've had some experience volunteering in non-profits and public schools as well, primarily teaching English, Science, and Math.

I love learning and that's mostly what motivates me every day. I listen to Great Courses on Audible and they have a wide array of topics that interest me. As of this moment, I'm listening to the following: "Great Masters: Mozart", "History of British India", "History of the Ancient World", "The Learning Brain", "Modern Political Tradition: Hobbes to Habermas", "Mystical Tradition: Judaism, Christianity, and Islam", "Myth in Human History", "Plato, Socrates, and the Dialogues," and "Practicing Mindfulness: An Introduction to Meditation".

My home if you ever are interested in visiting the Philippines! I think I'm pretty easy to be around and I try my best to help out where I can. And I'm sure we'd have lots of things to talk about too, I'd love to hear all your stories, and share some of mine as well.