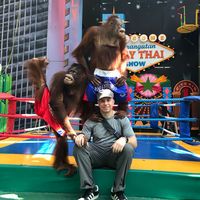 I host a free Falun Gong meditation and qigong class in San Francisco that meets regularly. You can find the schedule at http://panhandlefalungong.org

Passing the word along, Hosting.

Couchsurfed in New York City and Portland. It was fun and I met some cool people. Overall a positive experience!

I was traveling Europe for the first time. Towards the end of my trip I was in Paris. It was Bastille Day but did not know this until I fumbled outside of my hotel to use a payphone because the phone in the room did not work. I found myself in a mob of high energy Parisians shooting off firecrackers while heading towards the Eiffel Tower. I was amazed by all of this and decided to follow and see what was going on. I as close to the Eiffel Tower as I could when shortly after an amazing fireworks and laser light show happened in the sky along with music. The whole thing was spontaneous and great!