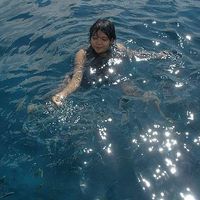 At the beginning most of you would say that I look 'serious'.. Well, maybe because of my glasses, or just that how I look even without glasses.. :-D
I know that first impression is very important.. But don't be fooled with that also.. As when you spend more time with me you might change your opinion about me soon.. ;-)

I like to meet and know new people, and it is always interesting to hear the experiences they had, about their trips or daily life.

I have been in CS since 2008, and since then I have met many kind of travelers, hosted them, some were nice and became good friends until now, and some were not.. but as I believe that there is always something that we can take as life lesson, so both nice and less-nice experiences are both valuable..

Organized events (one big gathering event in Karimun Jawa in 2008, and some small events in Semarang), gatherings in Semarang, participate in events held in Semarang or out of it, be a good host and good guest

I have met great people, made friendships.. I experienced not nice ones also, but compared to the great ones, those were nothing.. will not kill my spirit of building new friendships !

I can show my hometown or city where I live, and maybe we can travel together to other cities (when I'm available). I also want to exchange experiences and knowlegde.