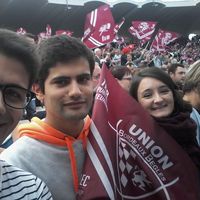 I am a really calm person, my sister had me practicing self control, and I almost never get angry now. i have lived on an Island called Mayotte in the indian ocean, and it gave me the "creole way of life" : unlike other parisian people, I don't like to run heading somewhere, I say hello to most people in the street when they look at me, and smiling is essential to me.
I love travelling because I already travelled a lot (cf countries where i have been) and I learned that you can learn so many things by listening to people from other countries, by not having all the confort we have in France...
I hate wasting food, or everything else, and I have been a volunteer in several missions already. Helping people the way i can is the meaning I want to give to my life.
I am a catholic and go to the church as many sunday as possible.

I paid the required cotisation to enter the comunity, and will be really glad to welcome some people here, because I think travelling in another country and not having to pay for a bed, and meeting a lot of different people from other cultures and religions is a chance for everyone !

I like playing football, ice hockey, tennis, table tennis, and some other sports like basket ball or volley ball. I play the saxophone, and I just started the guitare, I love music. I also like reading very much, going to the cinema, night club, and restaurants with my friends, and obviously having fun !

The Butterfly Effect, Inception, The Illusionist, Arsene Lupin, Marvel movies, The lord of the rings, Star Wars, Die Hard, a lot of others, I like films.
I like all types of music, and music in general, playing the saxophone. I mostly listen to rock (alternative) french music, Metal (only with beautiful gril's voice, no shouting!)

I like reading very much, fantastic stories, crime stories, etc...

Visiting India in 2010 and participating in a development project was an amazing experience.