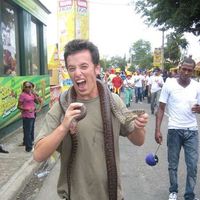 I recently moved in to a one bedroom apartment with several couch options, in a nice, cool part of Richmond. I would love to host more couchsurfers at this time. I will add that please try give me at least a few days notice when you message me. If you ask me the day before I am less likely to respond.

I think that my friends would describe me as fairly laid back and easy going. I have a pretty goofy sense of humor so it is important that people get that. I hope that they would also say kind and generous as well as warm and friendly which is how I see myself. I am often content either going out and doing something active or just staying in and hanging out with people. I am not much for planning or organizing, I find that I generally do things with some spontaneity. I try to be open minded and flexible as well as accepting of peoples differences

Ubuntu-african proverb that basicallly maintains my humanity is connected to yours. We are all a community.

I have hosted in the past. Not hosting so much now but I enjoy meeting people in the CS community

I am currently working as a counselor for children who have behavioral problems in the school setting. I like to be social and meet new people. I am always up for a random adventure. I feel that as people get older they often lose their ability to have fun and enjoy the absurd and ridiculous. I am physically active and have recently started taking Yoga classes. I love learning new things and meeting people from different backgrounds.

One of the coolest things I have done was move to San Jose and do an AmeriCorps program for two years. For those who don't know AmeriCorps is modeled after the peace corps except we work within the borders of the United States. The specific program I worked for is called City Year. We were a youth focused organization that among other things worked in some of the most challenging schools tutoring and mentoring. It was so cool to be consistently surrounded by a diverse group of people who had all made significant sacrifices to come together to serve in these at risk communities. I loved the friends I made there and feel it challenged me and helped me grow as a person.

Another cool thing that I have done in a somewhat similar vein was to serve as a peace corps volunteer in the Dominican Republic for two years. To move to a country where at first i did not know the language or anyone who lived there and to make it my home was a fantastic experience. I especially enjoyed having the chance to get to work with the youth in my campo and hopefully have a positive impact on them. I find that it is such a cool feeling to have made a difference in the life of someone else. I think that one of the craziest things I did there was called the Bola Race. The Bola Race was a hitch hiking race among other peace corps volunteers. Each of us formed teams of two or three and we met up at a central point. The organizers of the race would then tell us where our final destination was and we would hitch rides however we could. The catch was that we had to do this in costume with a story that went with our costumes as well as finish up a bottle of liquor before we reached our final destination. The ending places were usually some hostel in a beach community were we would all spend the night. It was a lot of fun and a great way to see the countryside.

I do stand up comedy, Just started so sometimes I am more funny then others but it is a cool experience.

I can show people this fantastic city.