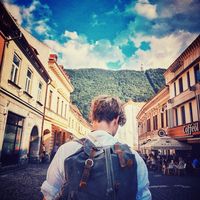 Okay before you click that request button some disclaimer :)

I love to help people out! Really! I like to provide more than just a stay. However, I am a chaotic mess when it comes to time planning and organising. Which results in some crazy adventures that not everyone would appreciate! So please do forgive me if things don't go as planned because it's bound to be.. not like... that you will end up on the street or something, but more like: we might lose our way or miss some trains and stuff. I love flexible people that can look frustration in the eye and have a laugh at it. Go with the flow of unexpectedess.

I really love talking! I have a very broad interest in everything! I'm curious! I love people; socializing is like breathing for me. I see every stranger as a friend I have never mett. If ever engaged in a talk be sure to prepare yourself for at least an interesting one.

I have a great passion for Media: music, games, movies are what I can talk about forever, from the industry to the products themselves. These are the types of arts that make up our legacy and that influence interests me a great deal.

I always told myself I wanted to travel after school but just realized, why not start already! all of this experience offers a person to grow more open and that's just what I need.

It's these teachings you pass on to the next generation.

I love so much, I ain't the person for small talk, it feels like such a waste, I'd like to wonder and make people wonder with the subjects I talk about.

If I would type everything this page would be 213 paragraphs long. For real there is so much that left a mark on me. I think If I would have to choose... it would be Tarantino's and Spielberg's work in the industry. At least the film industry. The new wave of Hollywood film directors changed the game and made the movies what they are today and it is that influence that I look up to.

If it comes to music I am really into Rock and Hip Hop. But I am open for almost everything, from opera to orchestra. My favourite bands are Greta van Fleet, Kaleo, Nothing but Thieves and Muse. if it comes to artists Eminem deserves to be at number one quickly followed by Phil Collins and Tommy Emmanuel. Again a lot of genres interest me including Electronic ones like Techno, Hardstyle etc. I love music. Just don't mention modern pop music. Please don't... I rather hit my tiny toe slightly against the corner of a doorport.

The game industry is something I still like. but do not partake in that much. Probably the best games I ever played where Naughty Dog's the 'Last of Us', CD's project Red's 'The Witcher' and Bioware's 'Mass Effect'. I am more a casual gamer than a competitive one but I love a good game of Battlefield.

I love how games bring people together by either telling someone what you did to their mom or by actually working together to shoot another player in the head.

When it comes to books I am more into self-help/information books than actual fiction. 'How to make friends and influence people' is probably one of the best reads I have ever touched (did not finish it yet). I want to take a peek into Peterson's 12 rules of life book and I loved Us vs Them written by Ian Bremmer. But when it comes to fiction I rather watch a movie than read a book.

Again my interest in media is too broad to be described here, I love to talk about it.

I worked on the most watched Dutch TV shows during my internships, won a price with a movie we made and had some very interesting chaotic adventures

Everybody you meet can learn you something and if they cannot, they can at least learn you what not to do. You pick what I'll be.

I can make you wonder, think, make you apprieciated something or completely hate it. If you want a different perspective on something, I'll have it. I love to challenge people's believes, not in a offensive way, but by asking questions. I am allergic to absolute certainty, which I fight with doubt and wonder. I greatly respect the individual mind and it's capability to come up with the most absurd philosophies. I have learned from some interesting ones. Maybe yours too?

A catalyst that ignites the firely passion to learn, about as much as possible. The wise are those who know that they don't know and I know, that I don't know... a lot of things... So I would like to get to know them... Does that make sense?

l don't like small talk, I did mention that right? So let's talk, politics, religion, philosophy that kind of stuff! Don't worry I will always treat lightly, I believe we should talk like we are right and confident but listen like we are wrong. Dialogue on these matters should be anything but taboo.

Please note that when engaged in a conversation: I have a hard time shutting up. I love it when people just jump in and start talking. It gives me the feeling they are passionate about what they have to say. And shuts me up too. I am really developing my "asking-questions" skills.

I have a thirst for knowledge and although I talk a lot. I do like to listen, people are amazing and all have something to offer. I just like to spark their curiousity and plant the seeds of wonder.