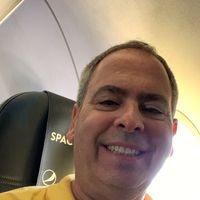 VERY LIMITED AVAILABILITY through the end of the year, but take a chance on finding me on an open date.

Native New Yorker and citizen of the world. Spent 15 years living in London and another two years in Doha, Qatar.

I have many interests and they are often eclectic, ranging from sports to theatre to politics and, of course, travel.

I spend a lot of time apologizing for Trump to all my good friends around the world, even after he's gone from Washington.

I am fully vaccinated against Covid.

I've now hosted surfers from nearly as many countries as I've visited, and it's been a wonderful experience. It's great to meet so many fantastic and diverse people. I now have new friends in many different parts of the world!

And I love "paying it forward."

Got my car stuck in the mud in the middle of South Africa's largest wildlife preserve, Kruger National Park -- and freeing it before we became brunch for lions/rhinos.

I've interviewed Michael Jackson in Tunisia and had dinner with Harvey Weinstein in Doha. I've also met interesting people who were not sexual predators! ;-)

A comfortable place to sleep, an apartment with great transport links to midtown and downtown Manhattan and the keen knowledge of a native New Yorker.