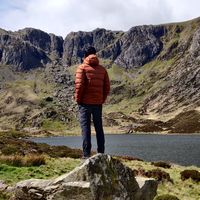 Current Aim: To have at least one acquaintance in every corner of the world.

Surfing
I'm really a flexible traveler. As I host, most of the times I feel it's important to spend time with the host. Either going around the city or cooking or doing something together. I have met many great hosts and I'm still in touch with many. If you decide to host me I'll be sure to make it's memorable for you.

Get to know new people their experiences share mine. Staying with a local is always better than staying in a hostel, airbnb etc. Now when I think of a city where I have been hosted, more than the attractions the people who hosted me comes to my mind. With some people, who I have hosted and have surfed at have been in contact for a really a long time. I thought this would never be possible but it seems so :). It seems I am travelling the world through the people I meet on couch surfing.

The second reason why I am on CS is to meet people!!
This is Why:
Some of the memorable quotes from my hosts/guests :D
Agnieska/Jaros (Ein, NL) : "People just kill the other guy because he supports the other club"
Molte/Artnuc (Mag, DE) : "People who don't do anything don't make mistakes"
***** (Berlin, DE) : "Let's go to Budapest, the best place I have been"
Albena (Blag, BG) : "Let's go karaoking"
Angel (Sofia, BG) : "Those motherf**kers" and "Don't ever forget where you come from"
Pavel (Prague, CZ): " Stupid people elect stupid government"
Johnny (Thessaloniki, GD): "My friends father stole my bike 😬".
Joshua (Napoli, IT): " I am the last and only option for straight men and couples in Napoli "
Irene (Zaragoza, ES):" We should let everyone study whatever they want"
Radu (Cluj, Romania):" We stole that from the Hungarians, but now it's ours :P"
Maciej (Wroclaw, Poland): "Chai, Chai, Chai... "
Dasarath (Bhubaneshwar, India): "Ab tho thum hamare roommate jaise ho"
Luca (Le Mans, France):" We have such weird food items, the cheese with worms are exhibited in a Swedish Museum"
Alberto (Venezuela): "it's sad when your own country treats you that way"

A very religious football fan. An Arsenal supporter, love to talk about football in general.

I collect football club scarves as souvenirs from the places that I visit. The following are the scarves that I have

Everything in my house and any help in case you need any.

For information about what to do and see in Eindhoven: www.thisiseindhoven.com.