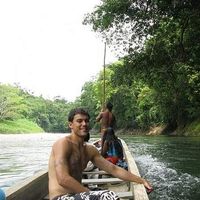 I plan to see every country and territory in the world or as much as possible .. also currently trying to reach the highest point of every country in the Americas!!

Wanting to make another around the world trip or try living a full time nomadic van-life with my girlfriend in the future.

I go out a lot ,like to try new stuff, and travel new places, meet new and interesting people. I'm a good friend and always willing to help out anyone.

I'm down for whatever.. whenever.. life is an adventure especially mine! I have high goals and no matter what i work hard to succeed in everything i set out to do. I plan to see the whole world .. I recently spent almost 6 years traveling full time around the world. I love to experience new cultures and see how other people live, their customs, traditions and what is important in their lives. I'm into all kinds of outdoor activities boating, kayaking, hiking, fishing, mountain climbing, SCUBA diving or just chilling on a deserted island beach. I'm never bored I live my life to the fullest, i want to experience everything the world has to offer.

I'm not about touristy stuff i like to see what is real from remote nature to the heart of the worst ghetto and everything in between .. castles to slums .. luxury to poverty.. any country on earth or any culture .. under the surface of all the oceans to the summits of the highest mountains .. I'd probably roll the dice and risk everything to live my dreams lose it all and risk it all over again .. I've been shot at.. stranded in the jungle.. been in an earthquake.. survived 3.5 hours floating in the ocean after a shipwreck ...slept on benches, couches, beaches, behind buildings or not at all .. met some of the coolest people from all over the world and I'm just getting started .. the world awaits!...

I currently have undertaken a mission to climb the highest point of every country in the Americas!!

Highest Points in other countries!!

driving through the Pyrenees and down the south coast of Spain
wreck diving in the Florida Keys
spontaneously writing the lyrics to an award winning song in Mataram
being at a higher elevation then anyone on the continent while on the summit of Pico de Orizaba the highest mountain in Mexico
cave diving in Northern Florida
white water rafting the Pacuare river in Costa Rica
camping alone under millions of stars in the Australian outback
standing over red hot lava Volcan Pacaya Guatemala
hiking to deserted beaches in Cambodia
visiting the Holy Golden Temple in Amritsar
exploring the temples of Hampi Karnataka
rowing along the Ganges in Varanasi and viewing the cremations while reflecting on the finiteness of life standing on the rim of Santiguito the most active Volcano in Central America
chewing betel nut with the King of Boti
traveling the stunning Karakoram Highway in Pakistan
convincing a Vietnamese soldier to take a photo with me who moments before had me at gunpoint
being cursed by black magic in Sulawesi
traveling overland from Indonesia to India in the most indirect way possible
talking my way out of jail in Sri Lanka in the former Tamil Tigers headquarters
100th SCUBA dive in Sipadan totally naked
standing on the rim of the impressive Kaietuer Falls in Guyana
seeing a ghost in the forest in the mountains of Northern Vietnam
traveling 9 hours by 4x4 with no roads deep into the Sahara desert to the ancient town of Tichitt
witnessing Tibetian sky burials in Kham
visiting the most militarized border in the world at the DMZ in Korea
exploring the maze of streets of the ancient city of Multan
viewing ancient mummies in the mountains of northern Luzon
swimming in all 4 of the worlds oceans including Arctic at 1am during 24 hours of sunlight
climbing huge 100ft tall dunes in the Gobi desert
drinking kava with the village chiefs on new years in Fiji
finding the grave of my 7th great grandfather first from that part of my family to come to America 300 years ago
driving through remote valleys of the High Atlas mountains
seeing the Spring Temple Buddha the tallest statue in the world in Henan
riding the Iron train in Mauritania from Nouadhibou to Zouerate the longest train in the world
viewing the north face of Mt. Elbrus in winter...