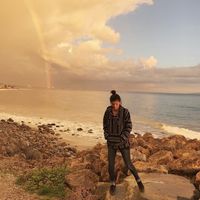 To make new lifelong friends, embark on spontaneous adventures, and be immersed in local culture.

I work as a fashion knitwear designer specializing in knit technology and 3D-knit textile development. I founded my fashion brand @knarli_knitwear to create seamless knitwear produced with German and Japanese 3D-knitting machines. I travel the world to explore fashion, art, and design and enjoy meeting people from different cultures and beliefs.

My favorite books include:
Fight Club by Chuck Palahniuk,
The Alchemist by Paulo Coehlo,
Fahrenheit 451 by Ray Bradbury,
1984 by George Orwell, and
The Power of Now by Eckhart Tolle.

I enjoy journalism and periodicals. My favorite publications include the Wall Street Journal, international Vogue (especially Italia and Paris), the Washington Post, W magazine, and both LA and NY Times.

I have been told I have terrible taste in music— please don’t ask because I will embarrass myself.

surfed on an actual surfboard (not a couch!)

Fun fact: California would have the 6th highest GDP if it were a country.