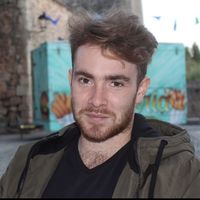 I find the world the to be unfailingly hilarious and generally absurd and wonderfully unyielding to the desires of one and all to make blanket statements about it. I adore ironies, hypocrisy and the things-that-don't-quite-fit.

My own doomed journey towards enlightenment has mainly been spent in the UK, Argentina and Russia with each country constantly reminding me to keep an open mind and not to be scared to change previously held opinions.

Generally I try to be honest, take people at face value, take opportunities when they arise and never, ever, stop learning.

Couchsurfing is something that, in this rapacious, capitalist world that we seem bent upon constructing, really shouldn't exist. Based on the wonderful idea that one might just open their home to a fellow human being, not in search of any material reward, but instead seeking a different kind of profit and enrichment - from the mutual exchange of ideas, influences, music, cuisine and arts. And all of this done on trust. That's pretty special stuff if you ask me.

My main interest is words. Words are the essence of life. I love reading, I love writing; I keep journals, write articles for newspapers and write as many songs as I can for guitar.

Whilst being by no means an athlete, I do dabble in sport - from boxing to football, cricket to long distance running - and I'm an avid watcher of it. I'm one of those lamentable and thoroughly woebegone creatures whose misfortune it is to support Newcastle United FC and going to football grounds around the world is something of a hobby of mine. That said, there is little that can surpass a balmy afternoon spent drinking champagne and watching cricket on a village green.

Music:
- Nessun Dorma makes me feel safe when I take off on an aeroplane.
- Despite having no connection to the country besides the M4 motorway I do think the greatest national anthem of all time is the Welsh.
- I enjoy washing up to Strauss' Blue Danube.
- I have the title of The Libertines song "Don't Look Back Into the Sun" tattooed on my left bicep.
- I cry a lot to music but most of all to the bagpipes.

Hitchhiked from Mendoza to Buenos Aires.

Could teach English/Spanish. Apparently being an English teacher is my job so I hope I'm good at that.

As for learning, well I'm really keen to learn as many languages as possible so teach me words! I want to learn about cultures, especially about their histories, politics, customs, traditions, cuisine, their loves and their hates.

I'm compulsively open so I'll probably share everything with you.

I can share stories, alcohol, immense conversations, advice (though I'm not sure how sage...), friendship, curiosity and good cheer.