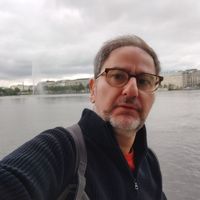 My name is Joel, I'm originally from Sao Paulo, Brazil.
I am a former lawyer and now I am working as an independent translator in the legal area, providing services to law firms and companies. I also have a degree in Sociology (Brazilian Studies). I attended a a master's degree in Governance and Human Rights in Madrid, Spain.
I'm currently living in Paris, France, and cannot host.
I love travelling, reading and movies.

Being on Couchsurfing can be a fantastic experience to meet new people from everywhere in the world and learn new things from them.

2) In 1993, I moved to Paris to pursue my studies in Law. It was the first time I was going to live alone, away from my parents. In the beginning, it was quite difficult, but eventually I enjoyed the experience and was very happy there. It was a great opportunity to learn new things and meet new people. I stayed there for 1,5 year.

3) Living for 7 months in the city of Maceió, Alagoas, in the Northeast of Brazil, enjoying a tropical paradise, wonderful food and companies (2010).

4) Living as a local during 10 days in Valparaíso, Chile, enjoying the city and its wonderful good vibes (2017)!

I hope to be able to learn from other Couchsurfers' experience and to share my desire in being an excellent host and guest!