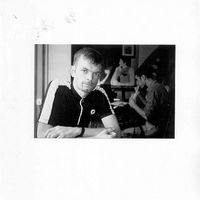 I don't necessarily define myself by what I do for a living. So much of what I think about and value in human life only occasionally manifests itself in the jobs I perform each day--although I'm working to change that. Writing is the principle means by which I compensate for the human potential in myself and others that is squandered on a daily basis. Fortunately, almost all my areas of interest--teaching, traveling, and composing music--are environments which allow me to ask questions and generate ideas I hope, in the words of Brian Eno "are better in other people's heads than they were" in mine.

Make yourself necessary to somebody.

I plan to keep teaching and traveling for the foreseeable future so opening my door to fellow adventurers is a small way of expressing my gratitude to everyone who has opened their homes and lives to me during my extensive travels. A list of people I've met or hosted in Morocco is below.

Back in December 2003, I was in Casablanca on my way back to the States to visit family for the holidays when the airport was abruptly closed due to foggy weather. A couple of friends I'd just met were contemplating a ragged evening of sleep in the airport when a jovial man from Wales offered to let us sleep in his apartment in Rabat - one hour away. We accepted without hesitation and he drove us back to the airport the following day. All of us missed our connecting flights in Amsterdam and once again our Welsh friend (who was visiting a close friend in the city) offered to put all of us up for the night. I'll never forget his generosity and I'm still waiting for the opportunity to help someone else in a similar situation.

1) Sitting near the Cliffs of Moher on a windy day in October, watching sunlight sparkle (like fireflies) through the ocean mist blowing up - and over - the cliffs and knowing the moment would never be repeated.

2) A beautiful but soul-searching 25-km climb on a mountain bike with my friend Raghu as we left Kosovo and crossed into Montenegro. One of the most physically challenging things I've ever done.

3) Watching the sunrise from a hilltop in Kyoto with a few of my closest Japanese friends. Sadly, we haven't seen each other since then.

I can answer almost any question about teaching, living abroad, marathon training, and long-distance running. I am very passionate about history, philosophy, politics, music, film, photography, literature, and ESL teaching. I'm always interested in learning how to cook your favorite dish.

1 My favorite music (I make compilations every 3-4 months and email them to friends all over the world) and books 2 Fun places to go (and running and cycling routes) in Minneapolis 3 Almost everything you ever wanted to know about teaching and running.