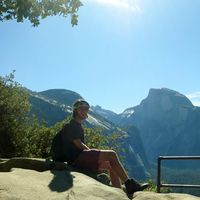 I like to pursue different interests all the time, so I get on well with people with passions and the curiosity to explore them. I like not taking things too seriously.

Used to host more - and now trying to surf some - also done a fair bit of hitchhiking round Europe and sleeping on pretty awkward surfaces - or lack thereof.

Hiked up Mount Fuji in Japan in torrential rain and minus something degrees Celsius. Amazing thing seen: at the top of the mountain, the only other English guy there wearing shorts.
Or hitchhiking in the desert in northern Australia, that was warm.

I could certainly talk to you about films, books, veggie food, life, etc etc.