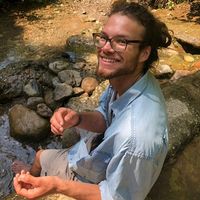 UPDATE: I no longer live in a flat near Barcelona. I can try to refer to friends and am often available to hang out, but I can no longer host, unless you want to set your tent next to mine, haha.

-Please no requests more than one week in advance:)

-Please cancel your request if you've found another host before I confirm.

I was born in 1997 in Amsterdam to parents who were amidst the process of moving to the Catalan Pyrenees. I grew up in the mountains with few people around, making travelling (both solo and with friends) a great way to meet people. I've studied in Rotterdam and I've been a ski instructor in Austria, and I'm currently studying in Barcelona. I spend my summers working as a cook on a tiny campsite and travelling, while my winters are spent skiing.

Over the last few years I've travelled around Europe with a friend. We favour minimalistic travel, and tend to use hitchhiking and buses as our methods of transportation, while we sleep on the street, in nature or on couches of people we meet. We'd like to make it easier to find places that fit into the last category, and I thought couchsurfing was just the place!

Now that I've been using it longer, I've fallen in love with the concept of opening your home to someone, as it has brought me only positive things!

I have a very broad taste in music, ranging from Ambient or Chillstep all the way to Ska or psychedelic rock, with a tek/trance detour and few unturned stones in between.

I enjoy rewatching Rainman and Good Will Hunting on occasion, but any movie that will make me think is a good one.

I recently read Moonwalking with Einstein.

Spent two nights on the city wall of Dubrovnik, among countless other unexpected places.

I can bore you with rants about ecology, vegetarian cooking, student partying. Would like to learn new languages or worldviews

Stories, of course! There's also a big chance I can help you in the kitchen.