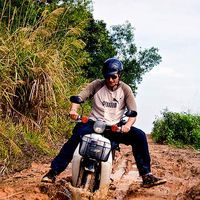 Enjoy the little things in life!
"42"
The best is yet to come! You think you've seen the sun, but babe you ain't seen it shine! (Frank Sinatra)

Couchsurfing is a bit like hitchhiking... Mostly, you meet friendly, interesting and amazing people and occasionally make a friend for life. Well worth the few weirdos you encounter!

I had a few CSers over in vietnam for a weekend while I was living there, we had great walks, great talks, lots of rice wine and lots of fun
When I got to Montpellier I was couchsurfing until I found a place to live and a couch to host on.
In Helsinki/Vantaa I actually ended up being the flatmate of my host and I am sure that I could not have found better friends any other way!

nature, photography, skating (as soon as I can afford skates that fit again), crossbiking on my little moped, drunk dancing and photoshop, 420 friendly

Sunrise from Bach Ma Mountain in Vietnam,
Seeing a Lesser Mouse Deer in the wild (Google it; they are so tiny and cute!)
Riding mopeds in Hanoi,
Being kicked by a horse,
Getting lost in the desert with not nearly enough water,
Attended a very interesting Hare Krishna meeting in Mongolia (for anyone that has been to Mongolia: they had vegetables! Vegetables! Not mutton! You know how alluring that is when you are on a mutton diet for a couple of months...Vegetables! For those who have not been to Mongolia: Don't judge; believe me, you would kill for vegetables ;) )
Come to think of it, not enough yet; but I'm always on the lookout.

Just found out my favourite quote is by a cult (not Hare Krishna... is this whole cult thing becoming a theme in my life?) leader... Yay! It is a really good quote though... nope... don't want to be associated with that guy.