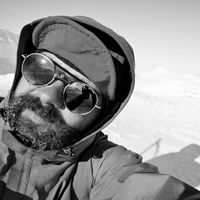 The last couple of years I've been living in Canada, Finland, Sweden and sometimes even Germany! Now I've kind of settled in the North of Sweden, near Arvidsjaur and spend my winters and summers here. Inbetween I am living more or less on the road.

I had great experiences as a couchsurfer in Canada, the USA, Sweden and some other countries. Now I have couch to share!

Difficult at first, but then I met so many great people!

Movies: The Godfather, Into the Wild
Music: A lot... My biggest influence might be Bob Dylan, Dire Straits and Led Zeppelin but I also listen to a lot of new music.
Books: Bound for Glory, The Grapes of Wrath, Into the Wild, Der Schimmelreiter, The Golden Spruce, Die Ilias

Northern Lights in Whitehorse, Powder-Skiing in the Canadian Rockies, working as a Musher in Canada, Roadtripping through Canada and the US, conquering the swedish Fjäll by dogsled, cycling more than 3000km from Lapland to Germany.