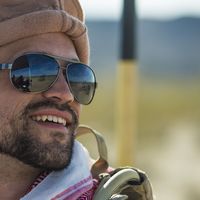 Lived a bunch of places in the US. Did the military thing, hated it. I'm now a member of About Face: Veterans Against War, and Ground Game LA. I do a lot of community organizing and political activism in LA, mostly around ending homelessness and the war. I also do movie stuff.
If you're asking to stay with me read the my home section. It's brief.

I can't see any other way of traveling other than staying with a local. Anytime I have to stay in a Hostel/Hotel, I feel like I'm being grounded.

Base jumped off Mt. Everest dressed as Iron Man and landed in a terminally ill Tibetan boy's birthday party to fulfill his wish to meet his favorite superhero, then promptly performed an emergency c-section on his mother delivering quadruplets, successfully using only yoga and meditation as an anesthetic.

I can teach you how to organize your community.
I want to learn about organizing.

I like discovering new music and sharing it.
I took four years of Spanish in high school but am far from fluent, I'd like to change that.
I'm pretty good at making terrible puns.

I'm more than happy to help out a host with just about anything. I'm pretty appreciative whenever someone has me as a guest, and don't like feeling like a burden. I hauled a massive pile of rocks out of one of my host's garden until I dropped one on my foot, taking me out of commission. On that note, I really don't want to move any more boulders, but I will if you ask lol.

I can cook a dish or two that most people can admit they enjoy eating without having to lie too much. I'm no stranger to chores and manual labor.

Whether you like it or not I will most likely share with you lots of bad puns as I think of them (which is often).