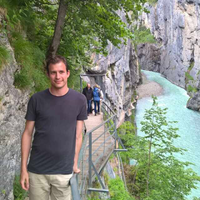 I teach English literature at the University of Tampere (Finland). I love travelling and learning new languages - the most challenging language so far has been Kalaallisut (Western Greenlandic). In the winter holidays, I work as a skiing instructor in the Swiss mountains, and I've played table tennis competitively since I was 13. I also like music, and I've played the piano since I was a child.

Camping in the backyard of the former prime minister of Greenland and having dinner at his house without knowing who he was...