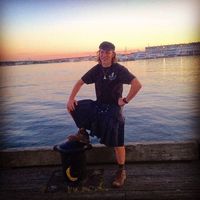 I'm known for having a big smile and a loud laugh. I've often been told I'm good at making people feel comfortable and "down to earth"

I recently was promoted to Assistant Professor, and my research investigates neurotoxicology of metals, particularly looking at the interactions between neurotoxicology and aging.

I love riding bicycles and shaking my booty at some live music.

PHILOSOPHY
I'm very ecocentric and independent. I think the earth/environment should be the center of our culture on a global scale -- our species' population has reached such a size that what we do make a huge impact. I aim to earn my captain's license soon (sea captain) and eventually acquire a ship to live and work on.

To meet people with interesting perspectives, to exchange ideas and learn what's going on around the world

In response to the Deepwater Horizon oil disaster in 2010, I was the student leader for a team that spent 3 summers sailing in the Gulf of Mexico collecting environmental and biological samples to determine the effects of the oil on wildlife and the environment. Our focus was on collecting little skin biopsies from sperm whales -- I was the primary person for collecting these samples and training all the students that rotated on.

A method of centering oneself by scope of time and place...a metaphor is using a microsope and a telescope to understand where/who/how you are.

Wisdom learned and learning from nature

I'll probably try to get you to ride bikes, if it's the right night for it