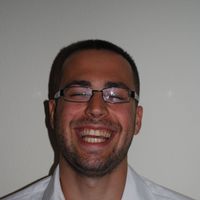 I just graduated from university a few years ago, and I decided to spend the next few years living in as many countries as possible. I just spent last year in Germany and Egypt.

I always hate when I'm in a foreign city and I know absolutely nobody. It makes it feel like the city has no context- I'm seeing the buildings and the tourist sites, but I'm not understanding how people live with them on a day to day basis. Couchsurfing changes that. It connects you with the place you're visiting through a person who lives there (and it's always an interesting person too!).

I really like learning languages. I didn't know that until my second or third year in university, but it's just so much fun for me to be figuring out how different languages work and using them to talk with people. Right now I speak four pretty well, and I'm hoping to learn more soon. :)

Other than that, I spent a lot of time reading, especially science fiction and history.

I once went on a hike with a friend in West Texas. There was a part of the trail that wasn't on our maps, but it was pretty short, so we thought we could just walk through it. When we got there, we realized there was no trail at all- the area was a giant ranch. We found a big herd of cows without anyone looking after them and just followed the cows around for almost four hours, thinking they'd lead us to someone we could ask for directions. Instead, they brought us to a dry streambed, and we decided to try and go along it. It led us back to our campsite, but through really dense brush. All in all, by the time we got home, we'd been hiking for almost fifteen hours and it was already dark. Maybe not the coolest thing ever, but I'll always remember the feeling of getting back to the tent and immediately falling asleep.

I always bring chocolate as a thank you gift. So that. :)