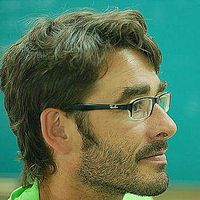 I am a IT engineer: I do GNU/Linux and Unix system
administration. I do volunteer work for Open Source
software projects. I like good and experimental music: Boards
of Canada, Captain Beefheart, Johnny Cash, Jazz, Greek Rembetica, Mexican Cumbia. I am a DJ. I like art, both modern
and old. I like visiting museums. I like literature,
like Gogol. I enjoy good food and drinks. For sports, I am a pugilist.

I married Jelena, on CS as http://couchsurfing.org/people/argo .

In 2014, we moved from Eindhoven to Tilburg.

I have hosted some people, and I've enjoyed being hosted. I visit local CS groupmeetings in The Netherlands and I've organised a bicycle tour for
a local group. I am organising CS Language Meetings
in Eindhoven.

I participate in CS-meetings in Eindhoven.

See also my personal homepage at http://mdcc.cx/ .
I enjoy traveling, these are the places I've visited:

Recently seen movies (2009-06) "Enjoy Poverty" (Dutch
art documentary about africa and humanitarian NGO's),
Documentary about life in Chili by dutch artist Heddy Honigmann. I like arthouse movies by Wim Wenders,
Buster Keaton, Krzysztof Kieslowski, Werner Herzog, Miranda July ("Me and You and Everyone We Know"),
"Dogville" by Lars Von Trier, "Waltz with Bashir",
actress Charlotte Rampling and lots of others.

Seeing a bird of prey flying in the sun at La Palma, Canary Islands.

Hearing about 10 electric guitars playing at maximum
volume in a small club, doing a one-chord piece by Rhys Chatham.