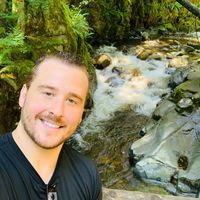 Life is 10% what you make it; The other 90, is how you take it.
I'm Canadian eh.
I made this account Sept.15th/2015.
I've been traveling a lot..4 years ago I did a bit of Europe, and the following year I did some hot countries (Cuba, Dominican, Costa Rica) and then I made this account in Tokyo (2015), and I saw what I could of Japan.
Following this, I booked a round trip (since that was the cheapest option) to go home and back to Tokyo (with a layover in Shanghai) and ended up buying a Chinese visa and went there instead! I stayed in Shanghai 60 days, went to Hong Kong 2 weeks and back to shanghai another 60 days. Now (when I originally wrote this) I've done the same thing with Seoul, South Korea and booked a round trip, then went to Thailand after and home one way.

I'm couch surfing to meet new people and maybe save some money. I could rent an apartment for $500-600 a month basically anywhere, but truthfully I never know how long I'll be continuing my adventures, so I'd love some good people to share an epic night out /experience with. I used to always only travel with other people...now I've been going at it by myself...but I do feel like it's a more fulfilling experience with other people...and especially people from other countries, or at least new people or ones not from my home town. It's a mind broadening experience.

My interests are very vast. I'd love to get out in each country as much as I can, and see as much as I can see. Honestly, I would love to see every inch of the world...from the gutters of the roughest towns to the classiest of places I probably couldn't afford (as of yet😉). I do alright for myself as a jobless hippy, and have a big interest in making (or saving) money wherever possible.
I also like drinking/partying, etc. I'm beyond laid-back, and I have a huge interest in meeting new people. I would kick myself if I left any country without having a good handful of new acquaintances...
I try to get out a lot, and I do have a lot of knowledge about nutrition/fitness, weird tricks, homeopathic remedies, etc. I even created a group on Facebook called Bohemian Grove (mostly to store information, but it's been building as a small public group over time) and I used to go to different colleges doing speeches on health, cancer and the pharmaceutical industry as a whole..
Update 2020: I now do live streaming on MeetMe and a couple other apps under the name CanadianTraveller, I have been doing it a month as of mid-July and have 2000 followers as of now, so I’ll likely be streaming a bit on my travels.

I like all sorts of movies/music/books... I feel like that's something to get into in person maybe...
Some stuff I enjoy...
Music: Bob Dylan, the Black Keys, Jon Lennon, various rap... I'm pretty open to music. If it sounds good, it sounds good
TV: Rick and Morty, Suits, HIMYM, The Walking Dead, (also. "FEAR: The Walking Dead", which is a spin-off of The Walking Dead - in case you haven't heard of it), Family Guy, American Dad, Mixology (was an interesting show with only 1 season), Game of Thrones, &amp; the world news? lol...etc, etc.
Books: A Doll's House, House of Spirits, the Crucible, Chronicle of a Death Foretold, The Secret, Think and Grow Rich

I'm always open to learning anything I didn't know already. New opinions, ideas, etc. That's a huge reason why I'd rather live with people than by myself travelling.. Really, depending on the people I meet will determine exactly how long I'd be anywhere. And who knows, maybe I'll find someone to travel to some other places with and we could split the expenses.

With a host, I'll keep your place tidy. I'll clean up after myself. I expect to supply my own meals, or share expenses if we want to order in. &amp; I will try to best the best of company,(Perhaps I could bring a bottle of spirits for us? If you’re a drinker -which I am) If you're accepting enough to host me, feel free to ask me anything. I don't feel judgement. I'm very very laid-back and will not get offended by anything you say/ask. I do have a lot of nutrition/fitness knowledge (studied for 5 years, although currently not following any of what I learned). I have been told that I know a lot of random things and could definitely support some interesting conversations. Anything from world knowledge (carrying from the ancient Egyptian times to date, including old kings, their influence on people that carried throughout the ages (did you know the Egyptians had electricity &amp; running water?)...I can quote old emperors and give you my educated opinion on things that have happened/why (including religions, sustainable energy, U.F.O's/aliens😏).. I've watched National Press Conferences since 2007, and have reviewed many different documents on U.S.'s National Security Agency website (NSA.gov), which has previously classified documents that became public after the Freedom of Information Act. Even talking about this stuff now makes me want to meet some people and pick each other's brain, haha). We will definitely have a good time, and I love the bubbly/spirits, so if you want to go out, or stay in, and have some drinks I will probably be into that...
Depending on if you're busy during the day/don't want me bumming around, maybe I could leave my luggage at your place a bit if that's possible? (I have a suitcase and a backpack, so I wouldn't mind ditching the suitcase when I explore the city😁). I'm a very easy-going, good-hearted person, and besides the home/accommodations, I would like to meet you. Hopefully you have time for me😚