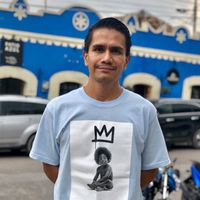 Most of the time I appreciate most of the people, because despite all the bad news around us this is a pretty sweet planet to inhabit. Beats all other options in the Solar System anyways. Well, except for Saturn (it's got rings man!).

Over time I've come to realize that there are a few different ways by which you can live many lives: travelling, reading books, meeting interesting individuals. So I want to do all those things as much as possible.

I'm a big fan of Music. And Laughter. And Nature. And Science. And History. And Beer. If you can relate to any of this, I'd definitely like to hang out, host or be hosted by you.

Mostly because it's based in an old fashioned, almost extinct concept: trust. Living in an environment where everything revolves around money it's great to see so many people sharing experiences just for the sheer joy of it. Kinda utopic really.

📌 Temperance and Restraint: yeah, right.
📌 Worldwide Culture: where you from? let's hear all about it.
📌 Languages: I suck at it but I'll keep trying.
📌 Tattoos: not too few, not too many.
📌 Rational Thinking: droppin' science like the mayans, son.
📌 Stand Up Comedy: the darker the better.
📌 Literature: I know, it's embarrassing.
📌 Politics: always a drag but you gotta keep an eye on those bastards.
📌 Music: one of those annoying vinyl-collecting dudes who also writes and records his own tracks now and then.

For the record, lists are boring and name dropping is pretencious. That being said...

Realizing that the human species is just a minute speck of dust compared to the mind-boggling, awe-inspiring, humbling scale of the universe. Nothing more, but nothing less. Therefore even if our self-destruction or continued existence is utterly meaningless from a cosmic standpoint, we owe it to ourselves as rational beings to get better at figuring "this" out.

In the same vein, the 5 days I spent in the Amazon jungle left me speechless.

My full-time job is teaching Spanish as a second language. So if you interested in brushing up on the basics I can help you with that. Also would be thrilled to learn pretty much any language.

Respect for their space and attention to tidiness. Plus willingness to try new experiences and a genuine interest to learn about and embrace the local atmosphere. Also hours upon hours of potential conversations, preferably alongside a nice cold drink.