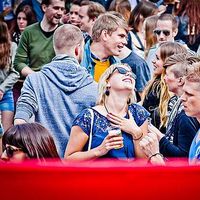 I live in the best and crazy place in Birmingham... Moseley!

Drinking instant coffee with morning view on the colossal Uluru (Northern Territory, Australia) glowing up in the sun...
Spontaniously getting involved in the big Candle Project in front of the parliament buidling in Canberra on Apology Day..