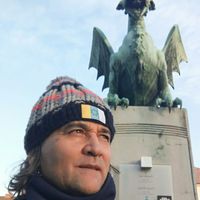 To live and to let others live in peace

I love travelling alone but I also like meeting people when I travel, however I don't feel confortable in those countries where generally speaking people are not tolerant about ideas or looks, and I have experienced a few.

I believe in the human beings who dare to think by themselves so I am completely against religions...if you live your life according to some religious rules, we will not probably get on very well.
I am left wing in politics.

I am afraid that I can't say that all my experiencies in couchsurfing have been positive, actually, just the opposite. I have hosted some people, however I haven't been able to stay at someone else's couch and I have sent some requests in the last 2 years but nobody has replied. Some of the people who stayed at home were nice, others just said "hi" and that was the only conversation during the time they were in the house, and other not so good experiencies that I prefer not to tell.

Travelling and taking photos, that is what I like the most. I enjoy historical sites, hikking, the beach, sightseeing in cities...

I was driving from Massachusetts to California with my chevy astro van and used to sleep in hotels and sometimes in the van. One night I pulled over at about 2 am in Nevada, in the desert, I remember the sky that night...amazing!