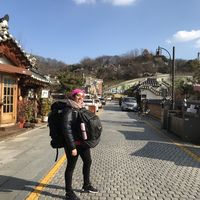 My name is Josefina (26) and I'm from Argentina. Currently living in Budapest, Hungary since August 2021. I am studying master's full time plus working in a company and in other places too so I am pretty busy usually.

I would define myself as a very easy-going, energetic, committed and creative person.
I come from a very small town located in Buenos Aires province in Argentina. When I was 18 I moved to Rosario (where Messi and El Che Guevara were born) to study. After I finished my studies in Marketing and worked one year in a company, I decided to move to China! It was the greatest experience of my life. I lived there for one year with a Chinese family while studying Mandarin at the local uni. Then the pandemic happened and had to return to my home country and for the chance to travel to Patagonia which was also one the most fulfilling adventures of my life.

I have hosted in Argentina has deleted their profile unfortunately so I don't have any reference now.

In my free time I like riding my bike, social volunteering, going to concerts, swimming, painting watercolor, embroider, going out, sightseeing, etc. One of my biggest passions are languages.

I am fully vaccinated.

I have always been very curious about traveling and meeting people from all over the world, learn about their culture and enrich each other. What's better than doing it like a local? That's why I am on Couchsurfing. Because you can have great experiencias with locals and opportunities to getting to know places that otherwise wouldn't be possible.

So far so good!

Books: 1Q84, Los mejores planes, La geografía de la felicidad, Las guerreras, Animal Farm, The Catcher in the Rye, Cristal Bell, etc.
My favourite writer is Haruki Murakami.
(I filled this section when I created my profile, I will keep it this way hahaha)

These are my favourite things to do so I can't name it all. I enjoy discovering new ones all the time.

Moving to China
Being an intern at a NGO in Natal, Brazil
Volunteering in Patagonia, Argentina
Getting to see thousands of penguins in Chubut, Argentina
Sunbathing and caipirinhas in Rio de Janeiro
Climbing Great Wall of China
Riding all over Berlin
Sightseeing Mount Fuji
Doing the Seto Islands cycling route
Walking 30 km the day I went to Forbidden City
Eating Fugu fish at Shimonoseki fish market
Parachute jump near Rosario
Kayaking in Patagonia
Being an amateur actress in Baoding, China
Getting dressed in traditional costumes in Jeonju, Korea
Moving to Hungary
Cycling in Vienna, Austria
Gypsy party in Bratislava, Slovakia
Working as a bartender in Budapest
Crossing the border between Slovakia and Hungary by foot
Kukeri Festival in Pernik, Bulgaria
Roadtrip in Provence, France
Visiting museums in Sofia, Bulgaria
Camping 10 days near Ljubljana, Slovenia
Hitchhiking in Lake Bohinj, Slovenia
Sleeping in a wooden cabinet in the middle of the forest with 3 friends invited by someone in a bar, Slovenia
Hosting my film club, in Budapest, Hungary
Improvised trip to Zagreb, Croatia
Drinking Rakija in every Balkan country I went

I do consider every day we can do great things, specially in small actions.

As I consider myself a very dynamic person, we can talk about a variety of topics.
I've always tried to be committed citizen. I've been involved in several activities and met hundreds
of people from different organizations which work is focused on: gender equality, cultural promotion,
ecology, health, education, technology and so on.

Luckily along my life I've met people from all over the world.
All my life I've been respectful to different cultures, but living in China definitely made me realize not only how different can be but also, and most importanly, the similarities we share.
Also thanks to Couchsurfing I had the possibility to meet and share experiences with people from a wide variety of backgrounds.

After all, we're all human beings :)

P.S I am a great cook (or at least a great recipe-follower :P)