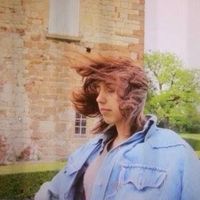 Hi!
I'm Joséphine, I live in Paris.
I am a journalist, working for various national and regional TVs, and my passion is filmmaking. I'm confident I'll manage to do both!
I travel a lot, on my own mostly (before I met by boyfriend), which is also why I'm on couchsurfing, a great way to meet fellow travelers! I may have a few weird life goals, my current one is to walk to the Eiffel Tower with my donkey.

The most important thing for me when I travel is meeting new people.
Second most important thing is discovering the local film.
Please forgive me if I try to speak in your language, my dream would be to be able to speak like 20 languages fluently... (so far I know how to say "where is the free food", that's a start).

Spending hours at night editing a movie. Although making one is so damn cool!
I play the cello (I mean, I'm getting back to it...), and what I like most is the low tone. If I could I would add one string ;)
Would live barefoot too.
I hate shopping, I love wandering in a city at night, walking in the countryside at dawn (myeah, sort of a dreamer).

I hate this kind of questions because I can never settle on a limited number of "favorite" music / movies / books.

As for the books, let's say higgledy-piggledy: the Count of Monte Cristo (Alexandre Dumas), Cyrano de Bergerac, Ken Follet, The Help, Aarto Paasilinna, Harry Potter, Jane Austen and so many others.

Music: Film soundtracks (Hans Zimmer!), Muse, U2, The Beatles, the Arctic Monkeys, Kanye West, the Xx, Fauve, Jain, Eminem... I listen to music all the time although half of the time I don't know the name of the band or of the song.

The California Zephyr! It's a great train that goes from San Francisco to Chicago. 54 hours, 3 days, no real stop, no bed, no shower, a pack of tea bags... the dream!! Gave me an addiction to trains.
Also in Lebanon: took a friend (that is, someone i met 10 hours earlier) to a trip in the mountains and got us lost in the night...
In Romania: the memorable village of Breb and its impossible hike...

I can share my toothpaste no pb ;)
I can teach some nice french recipes, although these are limited since I'm not so much into cooking (I'm at the other end of the plate :) ). Let's say though: crêpes, gougères, ratatouille, pralines (sssugar),
Can teach some French too! And the tricky sentences...