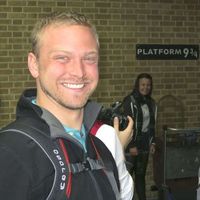 I'm always looking for new friends and travel ideas, so if you'd like to do something in Chicago or host me in your city, let me know! We'll probably end up on an entertaining adventure...

I love people, experiences, and traveling. Fascinated by history, business, tech, and a wide variety of other topics, I value learning, context, and laughing while experiencing and sharing as much possible. Let's do something!

I'm pretty active in the Chicago Couchsurfing community because there are so many cool people that do so many fun things! Since September 2019, I've done paddle boarding, white water rafting, kayaking, hiked at Devil's Lake and roadtripped to over 15 national, state, and local parks with other couchsurfers in 5 different states, got special access at ACE Comic Con and met Jake Gyllenhaal and Tom Holland, have been to, or helped organize, several rooftop, dancing, Halloween, and pumpkin carving parties, game nights at my place, and even a killer Dia De Los Muertos wedding between two couchsurfers!

What Do I Do?
Whatever I can! Please suggest something! I've blown glass on the island of Murano in Venice, Italy and learned how to row a restored gondola in the Venecian canals. In Rome, I made pasta from scratch, saw Romulus' hut (the legendary founder of Rome), Julius Caesar's home, Nero's sun palace (still being excavated), and went underneath the Colosseum to see the slave-operated elevator they reconstructed that brought animals and gladiators to the stage from the basement. I spent time with the tribal people in Yap in the Micronesian Islands, swam with sharks in Florida, reenacted the Boston tea party in Boston, went to the bath houses in Bath, England and Hot Springs, Arkansas, (the Las Vegas of the US during prohibition). I kissed the Blarney Stone in Ireland, ate haggis in Scotland, and took in the centuries of history in Tower of London. I white water rafted in Wisconsin and loved capsizing on a dangerous part they said we could try if we knew the risks... twice! I've also gone skydiving from 15,000 feet when the norm is 10,000, but honestly, learning how to co-pilot a super vibrating 2 seater piston helicopter with the doors removed was even more of an adrenaline rush... so far...

I've succeeded in making a local laugh in every city I've visited, a personal goal of mine. I love being an excuse for someone to explore places they walk past all the time. I've done couchsurfing while in Europe, as well as just met people who would let me stay with them. I've also hosted at my place and helped people explore Chicago with the insight of a local that's interested in the city's history and pizza.

I love spontaneous adventures with new people, which has led to some entertaining stories! Very up for anything, especially something active, involves talking about how crazy history is, or that requires thinking.

I like to go, and teach, blues and swing dancing, troubleshoot tech issues, repair broken parts on cars and bikes, and I typically say "Yes!" when someone invites me somewhere. And if there isn't something going on, I'm happy to make something go on!

Learn or do something new every day!

Success is measured by how many people are better off because of you.

That's one reason I am constantly learning and helping people out if they have issues with something, like their computer, car, or house, and I also like inviting people to game nights I host in Chicago.

I've unofficially been couchsurfing since I moved to Chicago in 2011. When I moved here and my apartment lease got pushed back 3 weeks, I was able to chat with strangers and we'd end up chatting, laughing, cooking, and hanging out so late they'd invite me to stay over, and I'd end up fixing their computers, washing their dishes, cleaning their tubs, and they would keep asking if I wanted to stay over again.

From 2011-2017 I had a three bedroom apartment, so when the time came for people to move out, I put up an insanely detailed and fun craigslist post looking for new roommates and several of the people that came over to check out the place as a potential roommate ended up staying for a game night or something. If it was late or bad weather, I just let them crash at my place, like people had done with me.

I officially surfed in Germany, Switzerland, and Minnesota, and old school surfed when I met a local in-person in Venice who was cool and stayed with them for a few days, and then stayed with someone I met in Portugal, neither of which were on couchsurfing. I just make friends easily.

Pretty much anything can be interesting if you talk to someone passionate about it.

I'm genuinely curious about almost everything, and I research something as soon as I wonder about it. So right now, my superpower is probably being able to know something about most things and be able to talk about it with most anyone. Uber drivers tend to ask me if I want to hang out later.

Typically I have fun with game nights, chatting with people and learning about the things they are interested in and why, startups, constructive political what-if back and forth occasionally (I naturally play Devil's advocate to better explore the likely impact of a new policy), playing sports, comedy shows, triathlons, game nights, the IT industry, the healthcare industry, running, jokes, museums, and anything new really.

But I've also chatted for an hour about electrical engineering with strangers and
I do math for fun sometimes with my extra cool friends to answer questions we're curious about. I'm definitely a nerd.

Twelve Years a Slave, Braveheart, Equilibrium, Requiem for a Dream (not sure if I "liked" it, but it was probably one of the best cinematic achievements)

Freedomnomics, The Bro Code, The Magic of Thinking Big, The Great Game of Business

Within one year I went to Ireland, Scotland, England, Switzerland, Italy, Greece, Washington State, Vancouver B.C., met Clarence Thomas, the supreme court justice in Washington D.C. as well as Raymond F. Chandler III, the Sergeant Major of the Army. I caught my first salmon in Wisconsin, did some triathlons in Illinois and Iowa. I also visited my family and saw Woodhenge and Cahokia mounds in the St. Louis area.

I also rebuilt a Toyota Prius hybrid battery for $140 in parts and tools when I saw that the bill would be $2,600 for a new one. I just learned how to do it myself. Now I help people not overspend for car issue diagnosis as a past time to help pay it forward. People have done some really nice things for me, so it just feels good to pass that on.

I can teach you how to swing and blues dance, fix computers, bikes, vacuum cleaners, replace and maintain car parts, and let you try a unicycle.

I respect people I can learn from. I like being helpful and learning as we go.

I would love to get SCUBA certified, go water skiing, skiing, or learn whatever you're good at.

It'd be nice to learn how to be a better lead in salsa, tango, and bachata dancing. I've got the basic steps and a turn down, but that's it. Please show me more!

Private pool, if it's nice outside, deck with nice patio furniture and a grill, big kitchen, roommate's white lab dog that loves to get petted, LOTS of board games, a game room with a 55" 4k TV with Amazon Prime and Netflix, tennis racquets and tennis courts a 2 minute walk away, and me! Definitely an entertainer! I do have a unicycle you can try...

I can only offer to share my room right now because I live in a house that's a co-op with 3 unrelated people (which is fun, since I'm social) but the landlord isn't a fan of strangers sleeping in the living room. But if I had my own place, I'd for sure be hosting more!