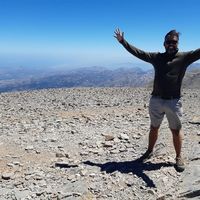 A Canadian working in the USA. I don't have a couch to offer these days.

I'm a low budget traveler. Except for the small fortunes I spend on food and drink.

Some friends and I recently bought a bit of rural land in Aragon, Spain. An ongoing project is to develop that.

I hope to make my way to central Asia soon.

Couchsurfing actually gives me a little hope for humans.

I have an extensive knowledge of 80's action and horror movies.