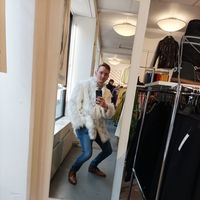 22 years old, recently becoming quite a hippie at heart. Originally from Germany from a farm in a tiny village with only 20 people, previously studied computer science at TU Munich, now doing my Master's Double Degree at KTH since August 2021. Professionally, I'm really interested in innovative startups and co-founded FinTech divizend.com about three years ago.

I have this fundamentally strong desire to continuously meet new people, let my world views become challenged and get an insight into completely different realities of life.

Heavily focusing on personal development right now and want to exchange with entirely new people about all this hippie stuff like the Burning Man culture, co-creation, communication about emotions, what makes you feel connected to someone or something, spirituality, personal freedom, relationships, polyamory, compersion, consent, societal taboos, fetish positivity, psychedelics, transparency, metacommunication and hedonism.

Always down for showing people around the city, drinking beers in a park or just in the streets.

When I invited five people from Crunchy Town (Melbourne) into my room after Borderland 2022 and became incredibly fascinated by their background.