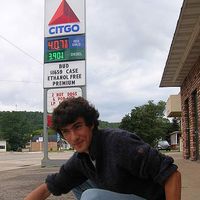 to part from my former life

I guess it would be way too easy to complain about summarizing my own personality so I gonna give it a try !
First thing to mention, since it is the oldest one I can remember, I never stoped running (well, jogging) and I guess, I couldn't ! It helps me a lot enjoying all the other things I want to do in a single day ! I wouldn't spend so much time in movie theater rooms if I were not able to run (or travel). I even recently discover a way to embrace those two activities : making documentary. That's my project for next year.
Another couple to be mentionned : literature (mainly french literature) and coffee !

My experiences on couchsurfing are all located in a rather recent past. I got aware discussing with friends that couchsurfing was the best way not to travel through a country without noticing places you wouldn't visit if you were a tourist. I was a little bit fed up about being a tourist everywhere even if I could handle the language. I had a really good time in Dublin for my first experience. In England, after a stay as a woofer in Wales, I could slowly visited Birmingham an Nottingham. Instead of rushing from one monument to another I was able to take my time, listening to the description I was given and the story of my host I was told.

I spend a lot of time watching movies, and the year I spent in Japan helped me a lot discovering japanese cinema. Later on, I would merge my interests for sociology and cinema, though I still have to make my mind up on how I can manage to do it.

I don't know what to quote. I went through the french nouvelle vague several times (even in Tokyo, now there is some cinema to organize some Truffaut sessions !)and also like to watch the movies of the american one (from Bonnie and Clyde, and the Graduate).
Ernst Lubitsch remains probably one of my favourite directors.
Last summer I gathered movies about the Vietnam war.

Doing a pilgrimage from France to Santiago by the end of the summer I carried all along the french part a tent with me. But once I crossed the spanish border it wasn't necessary to keep it anymore (there are plenty of dorms along the way). So I asked a bartender whether she had a child and I handed her the tent. She finally accepted and, after a coffe, I left. 10km later, I was so thirsty, I took off my backpack, and, I discovered those two orange juice bottles she had placed on it ! I kept her in my mind all the way long.

I have been staying in Japan (Tokyo) for one year in order to learn japanese language. Though, since i am leaving among international students I also carry on speaking spanish and english (besides my mothertongue : french).
I don't think I can honestly focus your attention on any particular skill, except maybe running. I have been practicing for several years, with or without a club, long distance running (half marathon is what I consider as the ideal distance) and I would gladly apply to such a race with other couchsurfers.