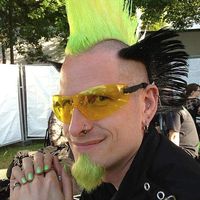 An extrovert deep thinker who just can't seem to settle anywhere, but in constant search of new experiences, feelings and challenges.

Alternative to the look and mind. Looking for people who can challenge my mind in a good discussion.

An agnostic atheist and philanthropic technocrat.

- There is no 'have to' - only consequences.
- You should fear the fear rather than being afraid.
- 'Just because you've always done it that way doesn't mean it's not incredibly stupid!'
- The world is wildly random, so don't take anything for granted and always beware of the 'illusion of safety'.
- If you believe in something, fight for it! But be aware that you may really have to fight, and that you might be wrong.

I've been hosting back since the days of HospitalityClub. When CouchSurfing was founded and everyone moved over here instead, it was natural to join the crowd.

Books:
A mix of mostly technical literature, books in psychology and communication, and a few biographies.