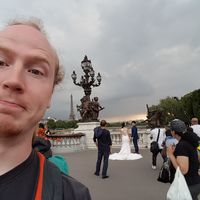 Pretty relaxed usually. Might tell bad jokes. When travelling, I like to be spontaneous, go to random places, explore. German living in Finland.

"In the beginning the Universe was created.
This has made a lot of people very angry and been widely regarded as a bad move." - Douglas Adams

SOME THINGS ABOUT HOSTING

- If you send me a request, to show that you have read my profile, please link me some kind of music =). It can be anything, something you like or something that's on your mind at the moment. I'm open to all styles.

- This should be obvious, but as it doesn't seem to be for some people: If you would like to bring other people than just yourself to stay over, link their couchsurfing profile(s) in the request, or at least write something about them. I am interested in who is coming :)

- If you send me a request earlier than 1-2 weeks before you arrive, I probably won't know if I have time to host. You can of course still do it, and I will probably reply with "Maybe" :P

- I preferably host people for 1-3 nights, possibly longer if we get along well.

Heard about it first at a "Primitive Survival" camp in Finland (3 weeks of living like in the Stone Age.) in 2010.
Spent the night after the camp at a Couchsurfers place, that's how I heard about the website.