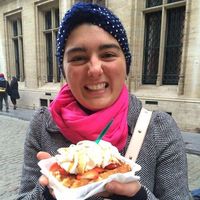 Hello! My name is Kami. I am originally from the State of New York. I worked for a few years in France as an English Language Assistant. I now live and work in Madrid, Spain, again as an English teacher.

Couchsurfing has come highly recommended to me from several friends! I have done hostels and Airbnbs before in the past, and while those experiences are also lovely, I really believe that Couchsurfing would be something else entirely.

I love travel, running, and hiking. And eating, but I think that was already presumed. There are other interests of mine, of course, though it seems boring to just write a straight up list at the moment haha.

Oof, there are many. I have an uncanny ability to quote many pop culture films (i.e. Mean Girls, Finding Nemo, Harry Potter of course). One of my all-time favorite films is Little Miss Sunshine though.

Music : my taste is primarily stuck in the 90s and early 2000s. Mr. Brightside on repeat.

Books : My favorite classic is Wuthering Heights, and apart from that I am primarily a fan of YA novels.

There's this volcano in Guadeloupe called La Soufrière, and it's the highest point in all of the Caribbean, apparently. I climbed it four times during my eight months there, and all the people who had lived there their whole lives were just like, "You've done it four times? I've lived here 45 years and have never once done it."

Bref, if there's an active volcano, you climb it!