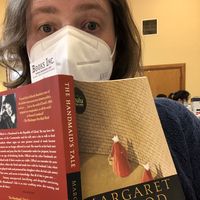 To help CS realize its full potential as a global community of trust. Also, to use less emoticons... :D (damn)

2022 Update: my goodness, Couchsurfing has been a roller coaster and I’ve been away for a long time… But I’m traveling to New Orleans soon and I’m hoping to meet some cool locals.

2009 Flashback:
I’m Karen, but within the CS community I go by KDT42! I’m a Serial CS Event Planner and friendly SF City Ambassador. Hoping to meet you at a community event!

About me? I'm usually good for a laugh or two. Once I get started on CouchSurfing or any topic I'm passionate about, it's hard to shut me up. I amuse quite easily. I'm a spontaneous dancer. I am a Mac person. I am a music-maker and dreamer of dreams. More than half of what I say is a quote from a movie. Like what I just said. That was from a movie (and ten points if you know which!) I like meeting new people as much as I like cliches. I could go on, but I feel as if I already have. Like to maintain some mystery. :) Oh yeah, and I use emoticons. A lot. :D

Through an amazing and somewhat unbelievable introduction to CS, I have fallen in love with the concept of CouchSurfing as a Global Community of Trust. Renews my faith in humanity and THAT is saying something.

San Francisco is my home and I take pride in being a part of this great city and make it a priority in my life. A self-proclaimed CS addict, I'm a friendly and well-known face in CouchSurfing community and always willing to help a fellow traveler and CouchSurfing newcomer if I can.

Over the past three years, I have truly enjoyed being a part of the Bay Area CS community, primarily as an community event organizer. Recently, I became a CouchSurfing Ambassador for San Francisco! Though I have hosted and surfed a few times, I truly feel there is no better way to experience CS than through a community event. It's hard not to embrace CouchSurfing simply because of its kind and open-minded participants.

Though hosting is difficult with my current living situation, I do host/organize many events at my place as well as being a regular attendee of CS meetups such as the weekly Underground meetup, 3rd Sunday Potlucks, and various art/film gatherings through the SFVLC.

Founded in 2009, The San Francisco Visual Literacy Club is an art/film appreciation group for CouchSurfers and friends! The SFVLC organizes free film screenings known as HOT CHOCOLATE MOVIE NIGHTS, as well as Bay Area museum meetups, open mic nights, nature photowalks, and various art gatherings each month. All are welcome to attend! If you have a great idea for a SFVLC meetup, feel free to let me know. :)

Everyone's experience is unique and (for the most part) amazing. Here is mine:
UPDATE OCT 2011: Feeling the love from San Francisco while contemplating a move for a while, maybe some international CouchSurfing in Australia and Japan... or maybe just dreaming of far away places. :)

Check out the official event website I designed: CouchCrashSF 2011
Enjoy Photos and connect with other attendees on the Facebook page

AUG 2011: Promoted to CouchSurfing Ambassador for the San Francisco community!

JULY 2009: Current living situation not conducive for hosting. Over the past few months, I have worked closely with many CouchSurfers to organize events, most recently Hot Chocolate Movie Nights! Began volunteering regularly for "Roving" Underground meetups and HOT CHOCOLATE MOVIE NIGHTS at CouchSurfing Basecamp.

MARCH 2009: Made it to San Francisco and stumbled into Underground, where I met a host I ended up surfing with while I looked for a place. Joined the event planning team for the Million Member March event and got hooked on CS events. :)

FEB 2009: Spent 2-3 months planning a big couchsurfing roadtrip across the US... Unfortunately, I was in a serious car accident as I was leaving. Despite my last minute cancellation, all of my contact with CSers have been positive and helpful. Thank you to everyone!!!

I was surprised to find that more often the excited and eager to help CouchSurfers lived in the outskirts/ throughtowns of the US. They don't receive a lot of requests, so when they do they are very grateful to have the opportunity to participate! It was very nice to see. :D

I am interested in many things, but too many to list here. Lame I know, but I do promise to fill it out more completely one day.

I have a very eclectic taste in movies, ranging from foreign animation (Miyazaki!) to obscure 90's comedies to contemporary independent films and documentaries. Those that visit me know that I am a veritable Blockbuster of over 600+ films. Too many to list here, but maybe one day I'll HTML code a list for you all.

I have a full 160 GB iPod. No joke! Lately, I've taken to listening to it on Shuffle mode for playlist made by fate... Most likely, mixed CD's will be my CouchSurfing currency if I take that cross-country roadtrip. I plan to leave each place with a mix suited specifically to my hosts!

I read occasionally too. Mostly novels that were turned into films.

My favorite book to recommend is The Cheese Monkeys by Chip Kidd. I was working on a screen adaptation of it when I met Chip at a event in NYC. He said that his own script was getting nowhere. It's really too bad because it would make a great film. Must read for art students/designers!

Taking a huge leap of faith for myself by packing up and flying 3000 miles was a great challenge that I met head on with the help of CS! I have done many things in my life that in retrospect were truly lived-in moments. I sink into sunsets. Was a fire-eater in the circus, twice. There is still so much more to do...

Sometimes when I'm in a silly mood, I teach people to partner dance in different varieties: Salsa, Lindy Hop, and 80's pop.

I enjoy playing pool/billiards at Underground when there is an available table. I can teach you what I know, but only with my dad's set of rules. That's how I learned. :)

I also love to learn things. Would love to learn Chinese or Japanese Calligraphy at some point in my life. I'd love you to show me if you know how!

Even though I need a ton more practice, I haven't given up on learning poi as well.