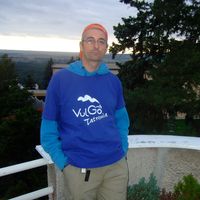 Please, do write me JUST IN EMERGENCY (SMS: +421-917-114662) when you are in the vicinity of Bratislava or within city limits and you still get no couch there. I have an experience people do order couch with me one-two-three weeks in advance and then do not turn up. Plus hitch-hikers often arrive to me just before I go to work at 5:15am.
And further to your frequently average questions: I don't live in centre of the city (14 minutes by bus) - indeed B'lava is a very small town, so I don't understand questions like "How far is to the centre?" (btw what do You mean with city centre: Slavin memorial?, Eurovea?, St.Martin' s Dome?, Royal Castle?), and yes, I do use this CS-profile for communication only(!) and have no Faszabook, Watsup, Instag, Weiber, Tinder, Binder, Telegramph etcetera (no profile on social networks means no bans). Plus I do prefer non-smokers.

I am not into touring/overlanding, I do prefer "urban jungles", plus I want to make Tatrania (i.e. the land outside of Bratislava) visible for outlanders, because visiting just the capital, people do by-pass Slovakia proper with its Carpatho-German gothic towns, skiing slopes [in winter, like Donovaly, Selce, Oščadnica, Vrátna, Jasná, Malino Brdo, Martinské Hole etc.], hot-mineral water spas (Bardejovské Kúpele, Piešťany, Bešeňová, Lúčky, Kováčová), 6 wine regions (including our part of Tokaj wine region) or they would really miss an unique Andy Warhol's Gallery in Medzilaborce.
And if you had not encountered a brown bear - our national animal - while visiting forests of Central and Eastern Slovakia then you were not in our small country at all!

I do like very much the political jokes and lampoons from Czechoslovakian history in 20th Century, something like as follows:

April 1941, German leader Adolf Hitler celebrates his 52nd birthday in Bratislava's Burgtheater. He invites prezident Dr Jozef Tiso of Slovakia to the party and says to him: "Herr Dizo, within a month I am to attack ze Soviet Union and I hope Slowakei is going to assist me!"
- "Sure, mein Fűhrer, I am to give you 1 biplane!",
- "Whaaat!? Just one airplane against Eastern barbarians? You must be kidding!",
- "Ja, mein Fűhrer, so I am to give you 2 biplanes!",
After an shouting outrage, Hitler invites into the room the Air-marschal Göring who threatens to bomb Bratislava, so terror-stricken Slovakian president bows down:
- "Yes, yes mein Fűhrer, so I'll give you all 3 our airplanes to your disposal!"
...
August 1941, German army progress 1000 kilometres into the territory of Soviet Union. Suddenly Stalin wakes up and sends a protest diplomatic note to Hitler: "Gerr Gittler, unless You do not stop with border incidents, we are going to call Soviet army mobilisation by October 1941!"
...
1936, German leader sends Franz von Papen, his famous diplomat, to Vatican to get the pope for the ideas of national socializmus. However von Papen fails. Then Hitler sends Göbbels. He fails too as he brings just small alms for NSDAP. Therefore he sends Air-marshal Hermann Göring (the typical exponent of so called hammer diplomacy). After 3 days there is an marconigram from Rome:
THE TASK ACCOMPLISHED! THE POPE IS DEAD. VATICAN BURNS. TREASURES OF MUSEO VATICANO ON A TRAIN TO BERLIN. TIARA FITS IN.
HIS HOLINESS, POPE HERMANN THE FIRST, MANU PROPRIA.
...
When Europe and World will be free and peaceful? - the frightened Europeans did ask in late 1938.
Thomas Mann, 1929 Nobel Price for literature winner (and from 1933 till 1939 an Czechoslovakian citizen) responded:
"When Franco's widow brings a message to the Stalin's deathbed that Hitler while visiting Mussolini's funeral had been shot-dead."
...
Joke is the only weapon of powerless and defenceless (Alberto Moravia)
...
1971, Soviet leader Leonid Brezhnew visits Paris. They show him Champs-Elisé (no reaction), Museé d'Orsée (his reaction is boring), Moulin Rouge (less boring one) and then they show him the Eiffel Tower. Suddenly he bursts in anger: "Only one watch tower for 5 million people, how dare you?!"
...
1943, Eastern front. German leader Adolf Hitler decorates Nazi-allied soldiers with medals, Magyars, Romanians, Fins, even one Slovak. He asks every one of them what they got the honour for. On the end he asks the Slovak soldier.
- "Well, mein Fűhrer, we were near a forest, me and my machine-gun. Suddenly out of woods 30 Soviet Sharp-shoorters launched out. I did shoot all of them down!",
- "Fabelhaft!" - ecstasizes Hitler. - "And how did you realised they were Soviet soldiers?",
- "It was very easy, mein Fűhrer. All of them had SS on their helmets."
...
Czechoslovakia, October 1951. Gusta Fučíková, the chief-editor of women magazine Květy české makes an interview with Martha Gotwaldová, the wife of the first communist president of CS, comrade Klement Gottwald. She puts a first question: - "Dear comrade First Lady, what is your daily routine?"
- " Well, on Monday, I wake up, put dressing-gown, make breakfast and clean a penis."
- "And on Tuesdays?" asks Gusta Fučíková after the first shock,
- " On Tuesdays, indeed, I do wake up, put sarong (present of chairman Mao), make breakfast and clean a penis."
Not believing what she hears, Gusta Fučíková wants tu put a cold blood face:
- "And what do you do Wednesdays?"
- "On Wednesday, I do wake up, take slippers, then dressing-gown, make breakfast and clean a penis.",
The same scenario goes for Thursday, Friday and Saturday (which was until Dubček's democratization-reforms in 1968 the working day in CS - note KT).
Then Gusta Fučíková asks in horror "Comrade First Lady, which penis do you clean? Of your husband, comrade President?"
- "Oh noooooooooooo!" - responds Martha Gottwaldová - "I do take bucket, water, soap and broom and I clean the dick, the enemies of my husband write on the wall of our villa in Prague!"
...
Slovakia, an Nazi-allied state in December 1944. The Little Red Ridinghood is going to visit her grandma into the forest of Lower Tatra Mountains to bring her an food in a basket. She finds the grandma's chalet empty. Outside she meets the Big Bad Wolf and shouts on him: "You scoundrel, that you had eaten my grandma!". "Nope" - answers the wolf - "she was arrested by the Gestapo for hiding jews and Soviet paratroopers."
...
Little Moritz is flirting with his teacher, Miss Gladnikovová.
- "Leave me alone" - says the teacher - "I don't like kids!"
- "Don't worry comrade teacher, I do have an condom with me."
...
Reluctance of Slovakian soldiers to fight for the Third Reich against Soviet Union in WW2 points out the following joke: 1943, dispatch from a front-line unit of Slovak army near Melitopoľ, Ukraine to the defence ministry in Bratislava - "Our brave anti-aircraft gunners had shot down 8 aeroplanes. One of them was a Soviet one."
...
After an intense air-bombing campaign of an Anglo-American air force against the Third Reich in 1943 the following joke was circulating here in Slovakia: March 1944, the Main Train Station in Bratislava-Pressburg. One passenger is complaining aloud his luggage being stolen just in front of the main entry. A passer-by responds to him in Slovak with strong Carpatho-German accent: "Zo what! I waz last month in Leipzig and I did put my Koffer into ze locker-room in ze Main Train station. Next day there waz neither ze locker room, nor ze Main station!"
...
What is the difference between capitalism and communism?
In capitalism the human is being exploited by human, in socializmus it's vice-versa.
...
Maťko, pupil of IV.D class, runs excited into the garage opposite to a school.
- "Hello, sir, would you be so kind and give me 10 litres of gasoline quickly?"
- "What for, mate, do you need it?"
- "Our classroom is burning!"
...
November 1975, Spain. Generalissimo Francisco Franco is lying on a deathbed. Priest steps to him:
- "Caudillo, in this very last hour please do ask forgiveness of all your enemies!"
- "I do not have any enemies, I had all of them shot dead." - whispers the dictator quietly.
...

Не сделал, however I am going to apply for Truth Social

Bratislava (Pressburg), the capital of [the Kingdom of] Hungary from 1536 until 1787 as well as of Slovakia since January 1919 is situated just 55km east of Vienna (Wien), Austria - our former capital (until October 1918 we were part of Hapsburg monarchy). And Budapest (the capital of Magyarorszag) is just down the river Danube.
Just above Bratislava there are Small Carpathian mountains, the royals like John Sobieski of Lithuanian Commonwealth or Maria Theresa von Hapsburg did enjoy the crispy wines from.
My personal choice for outlanders would be KC Dunaj in the historical centre of Bratislava, king Charles Stuart's tapestry (Primate's Palace), Pressburg royal castle with prince Svaetopluk's equestrian statue (with its ueberdick), VW Touareg joyride at Volkswagen assembly plant (Bratislava-West) and experimental Ancient Roman archaeology site Petronell-Carnuntum (in province of Lower Austria) just 12km west of Bratislava.

Ordinary apartment in Bratislava-East (see the pics) in the borough called Ruzinov (Rosenheim).