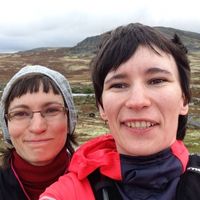 Hi 🤗
I am currently living in Warsaw, preparing to my first half marathon and trying to set up a balcony garden.

Curiosity, people, curiosity.
When I heard about couchsurfing I immediately loved the idea, but I was living in a student dormitory then and couldn't host anyone, and also I hardly ever travelled. But when I finally moved to a place when I could host someone, joining couchsufring was one of the first things to do. I still travel not as much as I wished, but I hope I'll get the chance to experience couchsurfing both as a guest and as a host.

I was a champion in national sword fighting tournament :)

I can go out with you especially to do some sport – running, joga, squash, you name it. I can teach you some fight choreography.