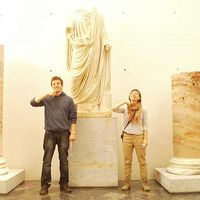 We are looking for our place in the world. Some time ago we decided to quit our stable jobs and go travel to South America and now to Canada... :) That's where we live and work now with no idea where we go next.

Kasia and Rafal. We know each other for years. We have traveled to many places in Europe, America and Asia together and on our own.
We share the love to travel and to listen good music vibes. We slept on many airports and walked many kilometers when couldn't catch the autostop. We both studied in Cracow where we met and after graduation moved together to Scotland for almost 3 years, travelling across Scotland and enjoying its dreich weather its really worth it. After travelling in South America, we ended up in Canada where we work and live now, we hope to meet lots of interesting people and places.

Don't get ready for the future. The future starts today.

We take part in couchsurfing acctivities, always try to help people in need:) getting know each other! socialize!

We have hosted lots of people in Krakow, not only through couch surfing as we were living in dormitories:) we were hosted in some places in Europe and South America. Always great so far.

We love to watch black comedies and about music... well, various.... from High Contrast to polish folk music... generally, whatever is worth to listen ;)

We have quit our jobs and decided to go travelling :):)
Kasia has travel by Autostop from Poland to Syria and Rafal has travelled by bicycle and hitchhiking accross whole Iceland :)

we could share/ teach to cook something Polish, to snowboard, to juggle, to speak spanish, polish, english, or we could just have a beer together

To our host we could offer a host in Canada and Poland when we will be back from our travel:) Also, what about a postcard from some place in the world??