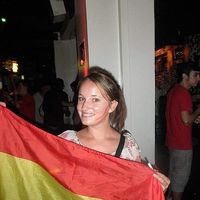 To travel the world, have fun and meet many many people before I get tied down working!

After I finished a gruelling four years at university and decided to pack my pack and travel the world.
I traveled around Europe and Africa in 2010, visiting 30 countries in a year! As you can imagine I had some amazing experiences and met some wonderful people! Unfortunately I only started couch surfing in about October. I love it so much and it is definitely the best way to travel, I just wish I had of started earlier.

Since then I have worked in Australia as an environmental scientist and recently quit to start studying my masters in Finland!

I couch surfed in Europe in 2010, I also hosted when I was in Australia to repay the favor! I loved being able to show people the local sites and maybe have a beer or two!

Travelled Europe in 2010 and did the summer party thing
Rode Camels and donkeys in Morocco
Lived in a village in Ghana withour running water (best four months of my life!)
Worked in mining camps in remote Australia for six years
Worked on a pig and sheep farm in Devon
Worked at a hostel in Belfast
Worked and lived in a pub in remote Scotland
Volunteered with a wildlife rescue center in Laos.

I can teach you how to make Australian food
I can take you hiking. I am always looking for hiking buddies!