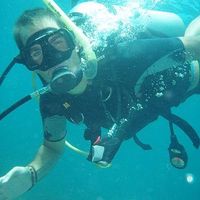 Supposedly, I'm a social little chatterbox and if curiosity was a virtue, I could likely aspire to become a saint. But on the other hand, the dark side must love my indecisiveness and time optimism.

I'm also a naive little boy that tries to repress that maybe not everybody in the world want what is best for her fellow beings. But I don't mind to live in that lie!

Food truly is a passion to me and I seriously don't think I could survive without it. Even more so, I love to share it (something I wish we all could to do). So stay sharp if you can't stand more than one fork on your plate! ;P

"Today is a gift. That's why it is called the present"

I give you a couch and as much hospitality as I can spare and afford.

I bring a big smile and a schizophrenic sleeping bag that believe he's a surfing board.

I'm a jack-of-all-trades and my interests ranges from all kind of nerdy games and puzzles; environmental and political issues; martial art, scuba diving and american football (though, the latter one I prefer to perform with a beer in my hand) to languages and travelling (doh).
Basically I just love to continuously challenge myself and my unprejudiced(!?) mind.

Well, I don't own a TV, I rarely read unless I'm on the road and I almost always let my friends pick the music... it is not from lack of interest, I just prefer social interaction. So, if you need to kill some time and have nothing to talk about, I'd rather play a board game! ;)

I studied a year in Munich which was pretty cool. It's by far not the most amazing thing that I've ever done, but it opened a lot of doors and has in many ways changed me as a person as that was the first real step on my journey to become a vagabond.

By coincidence I started to cut my hair while traveling and realized how doing everyday things gave you a brand new perspective on the place you visited. Especially if you don't speak the same language and fully have to give in to your senses. Also, Hairdressers are condemned as one of the most talkative and outgoing occupation, so don't worry about awkward silences! I've had some of the most amazing discussions with ppl I don't understand, all it takes is a little courage to get out of your comfort zone! Ok, this might not be as utterly amazing as adrenaline rushes or an emotional flash flood, but hey, Mount Everest is just another mountain and the Olympics just another commercial stunt. To me, it's the lowest expectations that makes the biggest impression... Hopefully I could provoke someone out there to challenge their touristy sheep herd mentality and give in to your inner flow!
So far I've been to hairdressers in: Germany (Hamburg, Munich &amp; Berlin), Austria (Vienna &amp; Salzburg), Italy (Grado, Naples &amp; Florens), Spain (Madrid &amp; Barcelona), Guatemala (Guatemala City, Quetzaltenango, San Pedro la Laguna &amp; Antigua), Norway (Oslo), Thailand (Koh Samui), Singapore (Singapore), the Philippines (Puerto Princesa), Laos (Vientiene), Cambodia (Siem Reap), Chile (Santiago de Chile), United States (Green Bay)

To learn about a culture you have to know the language and if that wasn't a reason good enough to take on Spanish, then just for surviving in Guatemala while gathering information for my master thesis was. :)

I'm a little Swede, so it's hard for me to brag about my skills and achievements. But maybe I could teach you how to fall victim for the Jante Law so you can start to live a perfectly lagom life in the socialistic Sweden! ;P