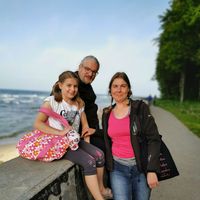 Sky is the limit ☀

Please contact us in advance if you want to have an accomodation. The situation with COVID is changing rapidly.
🌸🌸🌸🌸🌸

We are family of 3 - Kinga, Maciek and Erika. We are crazy about sailing, mountains trekking, hiking, traveling, books and adventures. We also like shanties concerts and having beer/wine/cola/pepsi/juce/coffee/tea/water or whatever ;-) ... with our friends.

Relationships are very important to us. We are into face-to-face meeting rather than the FB or phone contacts.

We work in a International Companies as Data Quality Manager (Kinga) and IT (Maciek). Erika does her job at the school.

I'm interested in a photography and Maciek is pretty good in making a wooden furniture and drawing (as a hobby). Erika is skilful artist with big painting talent.

We are not the pubbing and clubbing type of persons but our house is cosy and we are always in mood for the house party :-) with a good food, beer, wine etc.

We'd like to host/ surf CS families to give Erika opportunity for meeting children from different regions or countries.

If you don't have children, you also can count on us :). We adore meeting new people.

true love, sails, wind, adrenaline, freedom, independence ...
(...) When you really want something to happen the universe conspire at your favour ...
If you think adventure is dangerous, try routine. It is lethal.

We love travelling and meeting people, so CS sounds perfect :-)

We had a great time with CSes we've hosted. Erika is also into meeting new aunts end uncles. It's amazing ...

We like shanties, jazz, some classical music and generally prefer music from 70's and 80's.

fire walk, big storm on The Baltic Sea on small yacht, first smile of our baby girl Erika, ... but the most impressive one is still ahead of us :)

Positive energy, stories, cultural exchange, cooking, traveling with kid hints, and many, many others ☺